Good things are happening at Masbia’s new site with more on the way.

The food pantry is up and running at 105-47 64th Road, Forest Hills, on Thursdays from 2 to 5 p.m. The section to have dinner guests should be finished in the near future.

Holiday meals were dispensed in Queens this week by Masbia, a nonprofit pantry and soup kitchen network, NY1 reported.

The meals were dispensed outside the soup kitchen’s former location at 98-08 Queens Boulevard. Although Masbia lost its lease and was forced to close over the summer, volunteers still wanted to give hot meals to the needy.

Masbia (Heb: satisfy the hungry), a nonprofit soup kitchen network and food pantry, have been serving holiday meals this week on the street, outside their former home at 98-08 Queens Boulevard, in Rego Park, Queens, NY1 News reported Thursday.

Masbia Soup Kitchen volunteers served up some holiday meals on the street in December.

On Monday, the Jewish non-profit handed out hot kosher meals while outside their former home.

The kosher meals were previously made at 98-08 Queens Boulevard, Rego Park, before their lease ended.

The Masbia Soup Kitchen in Rego Park got some help from a realty firm last week.

According to Alexander Rapaport, co-founder and executive director of the Masbia network of kosher soup kitchens and food pantries, Stanley Schuckman of Schuckman Realty held a coorporate volunteer day at the all-kosher facility. Not only did he provide the labor for the meal that night, he also distributed cash for everybody who dined in the kitchen that day.

The Masbia Soup Kitchen specializes in supplying kosher goods to homeless residents across Queens and Brooklyn. Their kitchens serve hot meals five days a week and provides a pantry program during Passover. This consists of nine meals for the eight days of the Jewish holiday during which Masbia does not operate.

It looks like a construction zone right now but this empty storefront in Forest Hills is undergoing a transformation.

Masbia is currently operating out of this location in Rego Park on Queens Boulevard, where they've handed out more than a million kosher meals since 2009.

With development of a mixed-use structure imminent at the site, Masbia executive director Alexander Rapaport told the Chronicle in January he was cautiously optimistic  about finding a new location for the Rego Park soup kitchen.

On Wednesday, a relieved Rapaport announced Masbia had found a new spot to serve  the needy in Central Queens at 105-49 64 Road in Forest Hills, a half-mile from its 98-  08 Queens Blvd. location.

“Sadly, the only protein that families who rely on Masbia will be getting in this weekend’s food packages will be dry beans,” said Alexander Rappaport, Executive Director of Masbia, in an interview with Hamodiaon Thursday.

Ruben Diaz is the kosher chef at Masbia Soup Kitchen Network. The network has three locations: two are in Brooklyn – Borough Park andFlatbush, and the third is located at 98-08 Queens Boulevard, Rego Park, which garners the heaviest volume of food insecure visitors served by the network.

Diaz was born and raised in Colombia and came to New York City while still a young man, like so many other immigrants who arrived in the city before him. He had very little financial resources and no relatives here who could help him find his way. A decade later, his occupation has become his life’s calling. While he pursues the American dream, he has helped so many others by making it his mission to see to it that they do not go away hungry. 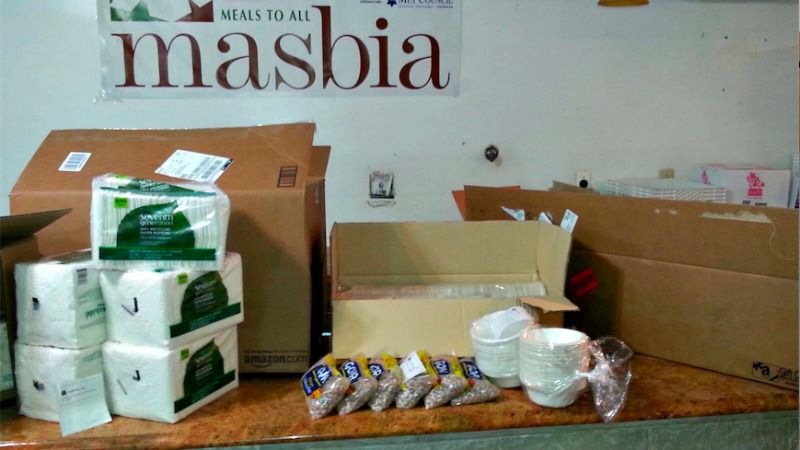 Yes, Masbia is looking for a new space in Queens. But first, how about more plates and napkins?

Masbia Soup Kitchen Network , the New York organization that feeds the needy in a dignified, restaurant-like setting, may soon be displaced from at least one of its three locations.

“We will most probably stop operating our Rego Park location at the end of January,” said Alexander Rapaport, executive director of Masbia. “We hope to have another place by then. There might be a break of a few days, but we don’t see it as a big break.”

A local soup kitchen that rushed to help the victims of a recent building explosion in Brooklyn is asking for help in replenishing its shelves.

The Masbia Soup Kitchen in Rego Park has been serving hot meals since 2010. The non-profit relies on donations from local food banks and the public to keep its food pantry alive. Lately, organizers say their supplies have been stretched thin due to the building explosion in Boro Park and a decrease in donations.

“Every week we give out 20 to 30-thousand pounds of food,” said Masbia’s Rego Park Site Coordinator, Patrick Jean-Baptiste. “Last week, we were lucky if we had 10 or 15 thousand.”

“People line up in front of here a few hours before we open and the lines go around the corner,” added Executive Director Alexander Rapaport. “We try to make sure to never send anyone away.”

To find out more about how you can help, visit: www.masbia.org.

Queens Chronicle: Feeding the needy, with charity to all

Gone are the days when soup kitchens were located primarily in lower-income neighborhoods, served only soup and, perhaps, a piece of bread, and conjured images of the Great Depression, with hungry, winter-coated men and women waiting in long lines on snow-covered sidewalks.

Case in point: the Masbia Soup Kitchen Network, which was founded just under a decade ago and opened its latest location, its third, at 98-08 Queens Blvd. in Rego Park in March 2010.

Tucked inauspiciously between a pharmacy and an Indian seafood restaurant, the kitchen could easily be mistaken for just one more restaurant in a neighborhood that overflows with eating establishments.

At the Rego Park location, diners are greeted by a casually dressed maitre d’-like figure who asks them to sign the guest book at a small kiosk before showing them in.

The packages will contain “LEPESHKA” Bukharian Jewish round challah bread for Rosh-Hashanah, honey, raw chicken, carrots for Tzimmes and much more, according to Masbia head Alexander Rapaport.

On a recent chilly afternoon in Queens, two women shivered in a line of about 50 people that trailed out the door of Masbia, a kosher food pantry and soup kitchen.

The first woman, from Manhattan, wore baggy pants. The other, from Queens, was clad in a long, draping skirt.
Their outfits signaled differences in how they interpreted proper Jewish dress for religious women, but both were there for the same reason: They needed kosher groceries, which are more expensive than average, as they try to live on less since food stamp reductions last November.
Read more
Add your reaction Share

Just in time for Passover, Masbia Soup Kitchen Network announced Monday morning a toll-free number for kosher-for-Passover food packages in response to increased demand from New Yorkers in need. Including seder staples, such as eggs, chicken, apples, walnuts, almonds, potatoes and more, the special packages will be available in Boro Park, Flatbush/Midwood, Rego Park and Manhattan on Thursday, April 10.

While stove gas is off, tenants must cope for an estimated 60 days

Residents living in the four Pomonok Houses buildings without cooking gas got an unexpected surprise when a Brooklyn van pulled up last week with a hot meal for all.

Up to 1,000 residents in 259 apartments had their stoves turned off two weeks ago after a defective gas line was discovered. Tenants were given two-burner hot plates by the New York City Housing Authority, which runs the 35-building complex in Flushing.


The gas may be out, but at least they’re not starving.

Queens soup kitchen Masbia is giving a ladle up to the New York City Housing Authority residents who lost their gas at the Pomonok Houses in Flushing earlier this month.

On a recent icy afternoon, about 50 people lined up outside Masbia, a food kitchen in Queens. They waited 30 minutes past the scheduled dinnertime as kitchen workers struggled to open for service.

“It’s not easy,” said Racquel Kahn, who had come off a 45-minute subway ride from Manhattan, as she shivered outside. She said she started coming to the pantry after her food stamps were cut by about $10 a month last fall.

Ever since those cuts, the city’s pantries have reported an influx of hungry people. About half of the pantries ran out of food after November’s cuts to the Supplemental Nutrition Assistance Program, the formal name for food stamps, according to a study conducted by Food Bank for New York City.

And it could get worse.

A Rego Park food pantry is giving people the choice to decide what food they want for their families.

Last week, the Rego Park Masbia food pantry, located at 98-08 Queens Blvd., introduced a new system that allows residents to choose what they take home as opposed to just giving them a pile of food.

It is a points system determined by food’s weight. You get 36 points in total to spend on whatever food you would like. The choices are divided up into three categories: fruits and vegetables, grains and protein and meat.

NY1 VIDEO: The Masbia Soup Kitchen in Rego Park added blueberries and dried papaya to each bag of groceries that volunteers give out weekly to those in need for the Jewish holiday "Tu B`Shevat," or the "New Year of Trees," which took place Thursday.

REGO PARK, N.Y. -- With the belief that no one should ever go to sleep hungry, the nonprofit group Masbia opened its fourth soup kitchen in Rego Park almost a year ago. Masbia, which brought in about $30,000 at a breakfast fundraiser last Sunday — with the promise of more to come — boasts that it is the only kosher food pantry in New York.

Masbia, on Queens Boulevard in Rego Park, opened in March with the help of Henry and Susie Orenstein via the Metropolitan Council on Jewish Poverty, and it is already serving more than 120 people a day, five days a week.

Every Thursday, clients – mostly local seniors and families with children – are given weekend packages of cooked and raw food to take home.